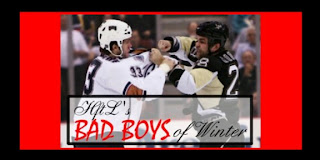 So how many of you ladies guessed that I would be doing my first "BAD BOYS of Winter" on Jarkko Ruutu this week? As you probably all know - he's one of my favorites!! Sorry - there's no prize, just wanted a show of hands!
Even though Ruutu was with the Pittsburgh Penguins for 2 seasons, he's not a well-known guy (he is well known, however, for being one of the NHL's top pests!). I believe he was, as a Penguins player, very underrated -- he was a smart player and never got the credit he deserved; I believe this was because of his "bad boy" image that had him on every ref's radar. In April 2008, he was voted as the NHL's 3rd dirtiest player tying with Chris Simon in the SI Players NHL Poll (which I believe is unsubstantiated - I'd really never consider Ruutu "dirty" -- on the ice anyway [grins]).
He was born on August 23rd and I'd never usually find this interesting or normally include it in a post, but it's my dad's birthday so I thought it was something neat when I found out about it!!
Here's a few of his fights where he gets the best of his opponent:
January 3, 2008 fight against Darcy Tucker (Toronto Maple Leafs)
February 10, 2008 fight against Steve Downie (Philadelphia Flyers) for which one of the greatest signs was made and posted at the arena thereafter (see the photo below from my own personal gallery ; ) ) 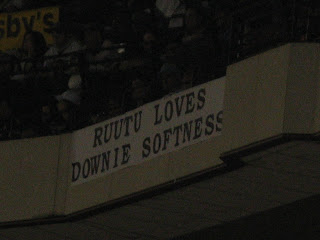 But the BEST part of Ruutu, by far, is his mouth and sheer talent for getting under players skin by using his brain (really sexy!); CLICK HERE for the THE MOST AWESOME DISPLAY OF THIS as Ruutu mouths off to Garth Murray of the Montreal Canadiens on the bench and Pierre Maguire picks it up on his mic during a VS broadcast (make sure to listen to all of it; you won't be sorry - it's HILARIOUS -- they actually have to turn Pierre's mic off at a few points)!!!!
Posted by Stephanie at 6:05 AM

I know a lot of Pens fans don't like him anymore because we don't have his agitating nature working in favor of us, but I can't help but love him!

I may renig on our agreement Stephanie. You many HAVE to share!!

I make a pretty convincing argument, I know; but then again, I think he sells himself. But, I'm sorry, I can't bring myself to share!

Yeah, a lot of Pens fans hate him now because, you know, he tried to break Crosby's neck.

Still, when he was ours he was a huge fan favorite. Every time he so much as touched the puck it sounded like people were booing, but they were always screaming "RUU!" For sure not underrated as a Penguin, but definitely a dirty player. If you have any doubts, here's the disgusting hit he got suspended for recently.

Like the commentators say in that video "That's where the league's gotta crack down, we're not taking that anymore." It's not good hockey, it's just intentionally trying to hurt people. I absolutely hate the Habs, but I wish Boullion would have beat the shit out of him, because HE was just defending a wronged teammate.

I'm sorry, but I just have to say this. And I will apologize for the lengthiness, in advance.

I'm not sure what was so offensive to Kimberlass to make her so hostile on this blog. It seems like she always have something LENGTHY to say about players we post here. She has her own blog, which she expresses her own opinions on the more “serious” (as she sees it) part of hockey. I would recommend you visit her there, if you enjoy her opinions.

Obviously, the commentors here still enjoy Ruutu (as I do), so please, Kimberlass take your ranting somewhere else -- this isn't a factual blog -- it's a entertaining blog that you have insisted on taking all the fun out of on several occasions now. We can all go find more information on the players/happenings posted here if we so desire.

Not to worry, this might be lengthy as well.

I've commented twice about players I don't like. I didn't think it was particularly a rant, I linked videos and said what I thought. Sorry, I thought, you know, I could comment on hockey? My mistake.If you look back, I've commented on other posts, such as Petr Sykora, saying how I liked them. I guess I'm only allowed to have a one way opinion.

I'll go back to my blog where, you're right, we write about our, as you said: "own opinions on the more “serious” (as she sees it) parts of hockey"

You're right, I do see the game part of hockey to be the more serious part. Stephanie obviously doesn't disagree, as she has her own "real" sports blog which she also refers to as "serious." Implying that this one isn't in comparison? I don't know. It's also pretty notable that our last post wasn't even about a real game. We're not that serious.

I didn't know having another opinion was so offensive to you.
I thought it was decided that this wasn't only for "eye candy" but I guess that was a misinterpretation on my part.

sorry about the length but it needs to be said

kena agree with you about kimberlass. im sorry to say this but kimberlass, u have said some pretty hateful things about a couple of players like mark eaton, ya ur allowed to post ur opinions but if it is something hateful i dont think u should be posting it, cause ur taking the fun away from everything, ruutu is an excellent player and he does use his head to his advantage. he is really smart and he uses it, i really miss him because we dont have him anymore but we got to move on and except godard and all the players that we picked up, i am always scared of ruttu when we play him now cause u know something he is getting payed to hit and to trash talk, get over it and if u dont agree well then dont say it and take the fun out of this blog. these ladies are taking time out of their days and working their butts off with this blog and i love this blog, keep it up girls!!!

I have to stick up for Kimberlass here - there was absolutely nothing hateful or hostile in her post towards Ruutu, or this blog in general. She's just pointing out what tactics Ruutu has utilized to classify him as a "dirty player" (or "bad boy", as this post itself describes him). Is there a rule somewhere that you can't have a negative opinion about someone? Blogs are for people to post their opinions, and if you want to jump on someone saying that having a negatitve about a player profiled in a post is an attack on the blog itself... that's a reeeeeal stretch there. And if you are offended because someone doesn't think the same way about a player as you do, you need to stop and think for a minute. True this is a fun blog and is meant for entertainment, but I don't think a couple negative comments ruins the fun for everyone.

For the record, I really loved Ruu while he was here, but I think because he was on our team, we we were all a little blinded at how much of a pain in the arse he was - as evidenced by his hit on Sid from behind earlier this season. I know he's really very different off the ice, though - doing work for charities and whatnot.

i'm a pens fans AND a sens fan; he's been beating On my team and For two years, with two different teams.

he may be a pain in the arse but he's Our pain in the arse and he gets the job done. it's a job, it's an industry. someone's gotta play the jerk-off in the romantic comedy and on the ice, that's Ruuts.

And yeah maybe the NHL *should* crack down a bit on huge hits... maybe they'll get to it when they're done defending Elisha Cuthbert's honour... :P

I am still having Ruutu withdrawal! I did get a wink and a waive from him at the 3-14 game where he scored his 100th point :) 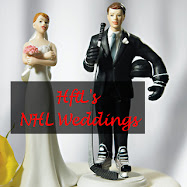